For most of my years growing up where I did, Kelvin Power Station could often be seen from a distance during our daily travels. This massive building with it's even more massive cooling towers bellowing steam into the Highveld air.

Kelvin, a coal fired power station, is one of only a few power stations in South Africa not owned by Eskom. Until 2000 the power station was the property of the City of Johannesburg, but it has since been privatized and bought by a consortium of owners.

I ventured a bit closer tonight to see if I could maybe get an image or two. This in itself was not an easy task. Between all the industry and buildings in the close proximity of the power station and the ugly fences around the place, I took to climbing some serious embankments, grappling over railway bridges but managed to get a nearly unrestricted view of my subject. I was on edge due to the large amount of vagrants around and shot as quickly as I could. I would of liked to stay a little longer but that would of compromised my safety. 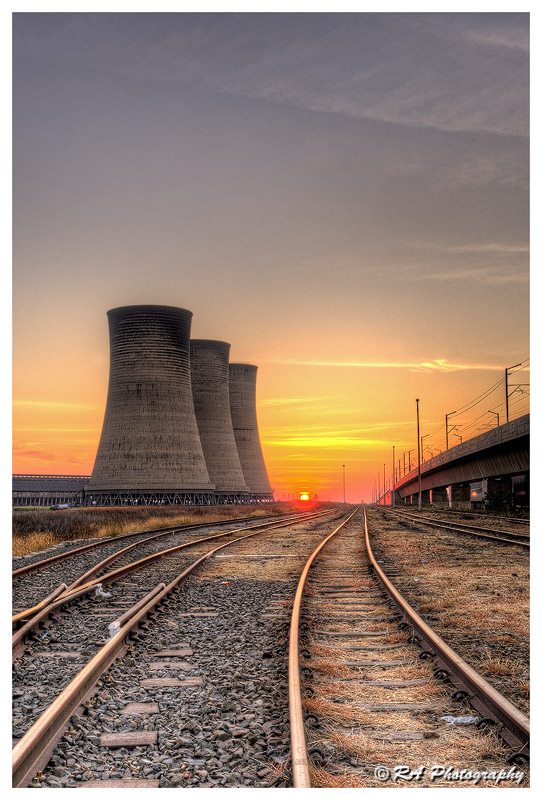 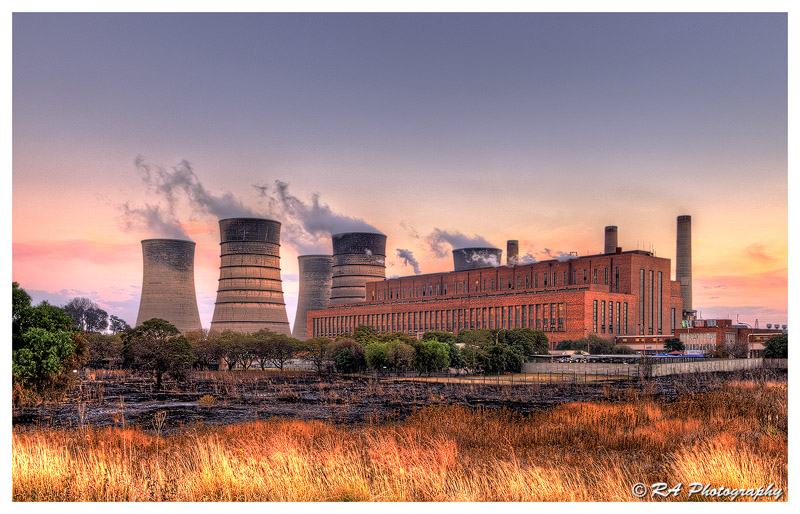 I recently took a trip out to Marievale Bird Sanctuary on the East Rand with the intention of testing the clarity of the Sony 500mmF4 lens. This was the one lens missing in Sony's line up since their acquisition of Minolta some years ago and was long awaited. The lens has Sony's new nano coatings on the elements which ensure superb image clarity and coupled with the 3 ED coated elements, eliminates any internal reflections. (I was keen to test these and thus the choice of  Marievale with the water and reflections seemed a good idea)

A lens of this nature is primarily used for Wildlife or Sports photography and I was keen to test it to see if there were improvements over the old Minolta or the Sigma fixed 500. It is not the lightest of lenses but then weighing in at 3.4Kg is also not the heaviest for this class of lens.

I arrived before dawn and there was a slight fog over the water which left some dampness over the lens and camera but this was not too worrying as the lens does its part to fight the elements with interlocking weather-resistant seals in and around the focusing ring and other vulnerable points to protect against moisture, dust and moisture.

I must say I was very happy with the results. Here are a couple of images from the outing. I coupled it to the crop sensor A77 giving me an effective magnification factor equivalent of a 750mm lens.

Sunset at the Witkop Blockhouse

When traveling through certain areas of South Africa one observes these strange upright square buildings with window openings but no windows. They are generally built of stone and seem to be from a bygone era which they in fact are. These are the Blockhouses that were built during the Anglo Boer war (1899 - 1902)

Most of the 441 masonry blockhouses were constructed between December 1900 and the early part of 1901. They were built to the standard 3 storyed blockhouse design by Chief Engineer Major-General E. Wood using mortared stonework or reinforced concrete. They were erected at important points such as railway bridges, railway stations and towns.

The standard 3 storey masonry blockhouse housed between seven and forty men. The use of the ground floor was for storage, the first floor as a living area and the second floor for observation over the countryside. The gap between the eaves of the pyramid shaped timber and corrugated iron roof and the top of the parapet wall on the second floor was closed by canvas “drops” during bad weather. Two steel machicouli galleries were placed at two diagonally opposite corners to allow flanking fire along the walls in case of an attack. They could also be used as a mounting platform for a machine gun. Access to the blockhouse was by means of a ladder to a steel stable type door situated on the first floor. The ladder could be drawn up inside in an event of an attack. Trap doors were situated in the middle of each wooden floor and access to the next floor was by means of a wooden ladder.

The roof was fitted with galvanized gutters, which chanelled rainwater through internal downpipes to circular corrugated iron water tanks on the ground floor. The tanks were topped up regularly in dry weather by train or water cart.

The Witkop Blockhouse was declared a national monument in 1948 and is one of the last fifty left in our country.

Many of these buildings have over the years been destroyed but fortunately, not far from where I live, there is a one in reasonably good condition to be found. I headed out there this afternoon hoping to capture one with a sunset to boot. 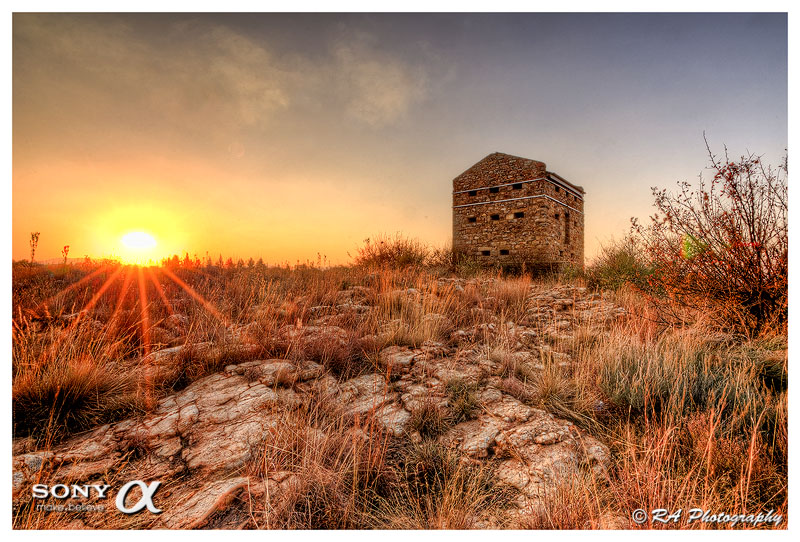 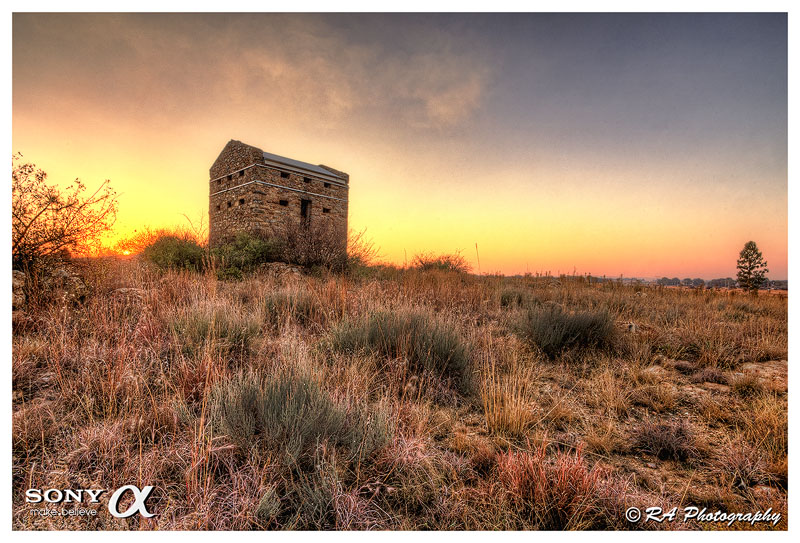 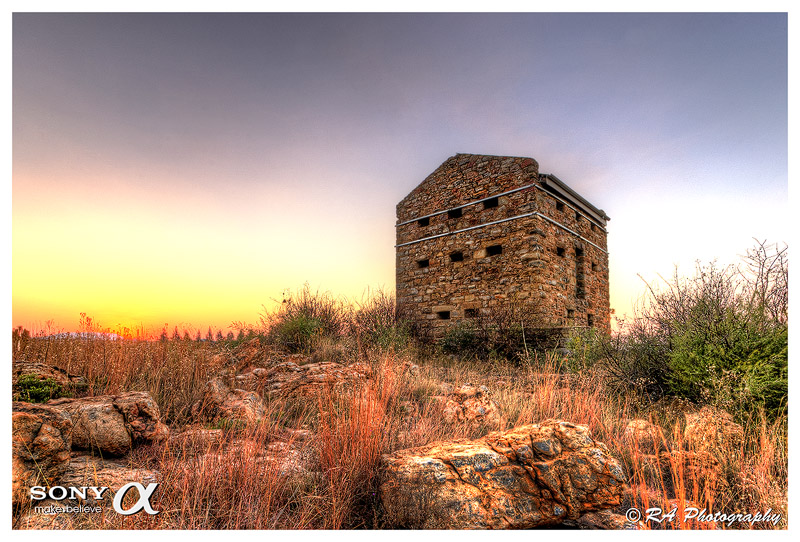 Just behind this blockhouse is an abandoned building which made for a good photograph too.... 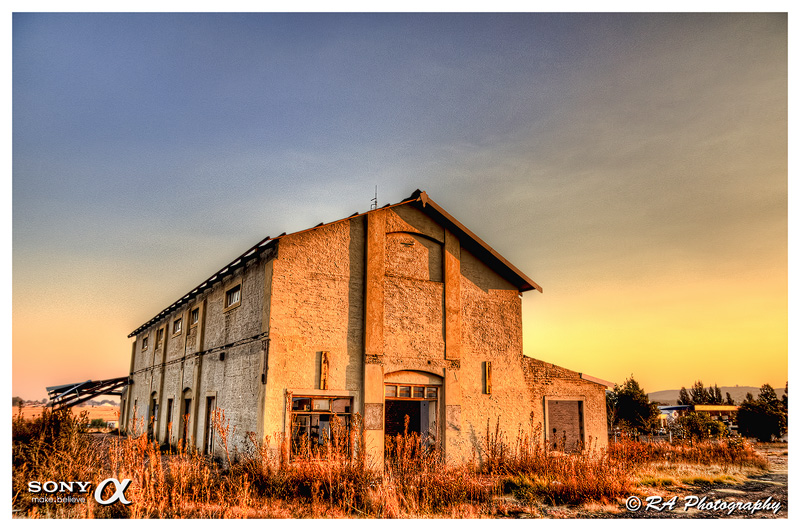 Being a keen bird photographer I generally spend a fair amount of time observing birds. Quite a few birds like Kingfishers and Owls aren't able to digest everything that they eat so they somehow have to get rid of this. In the case of Kingfishers it is normally a pellet of fishbones, scales and some other indigestable remains. I have only ever seen  this behaviour a couple of times and it normally happens very quickly, some would say in the wink of an eye. I was a while ago watching a particular Malachite Kingfisher through the lens waiting for him to fly and low and behold I saw him stretch his throat and then I knew what was coming.. My camera was set on high speed mode which allows me to take 12 photographs per second. I pushed the shutter release and caught 5 frames with this action.. that means that it happened in less than half a second from being in the throat till it was falling past the bird.

I have been dying to get out there and see how the new Sony 70-400 performs. It's silver predecessor is a stellar performer and is hailed by many as one of the sharpest mid range zoom telephotos available. The updated version sports a new white colour more in line with the rest of the "G" series lenses that Sony has in their line up. It has also been updated with the new nano coatings that were first used in the recently available 500mmF4 prime. The other major improvement that has been bandied about is the fact that this version ll focuses 4 times faster. Well I have used the first version since it was released and it certainly didn't focus that slowly so this must be a major improvement.

I had a cancellation in the studio this morning so I decided that this was the gap that I had been waiting for. I quickly put the kit together and headed out to Rietvlei Nature Reserve. It was already late by my standards (after 9.30am) when I arrived there and I set off to find some targets! I mounted the lens on the Sony A77 which is a crop sensor body making the magnification of the lens effectively 105-600mm. The lens focuses incredibly fast is all I can say. I don't have any way to measure exactly how fast but it locked onto the subjects with phenominal speed. The focus was accurate and even in situations where focus is often confused with bright backgrounds and busy foilage, the lens locked on and was 100% accurate.

The dilemma that now faces me is where do I find the funds to replace my version l lenses with this awesome piece of glass!

Some images from this morning... some shot not for their beauty but more to show the ability of the lens. 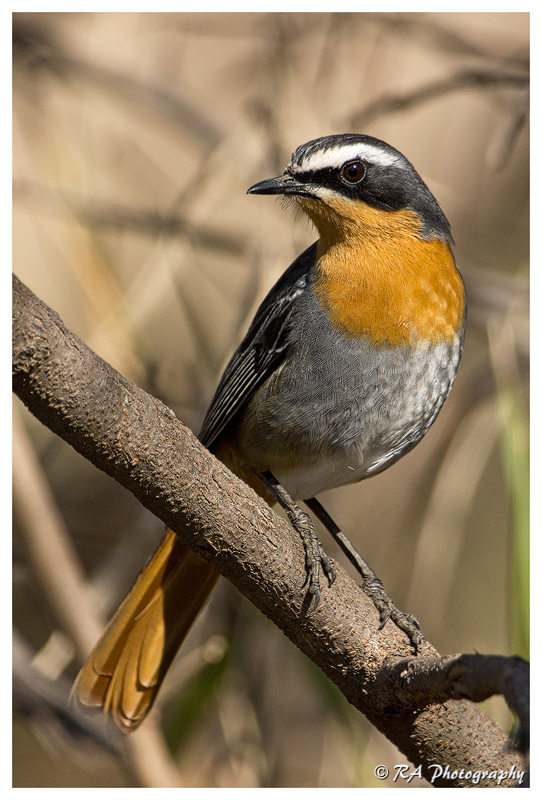 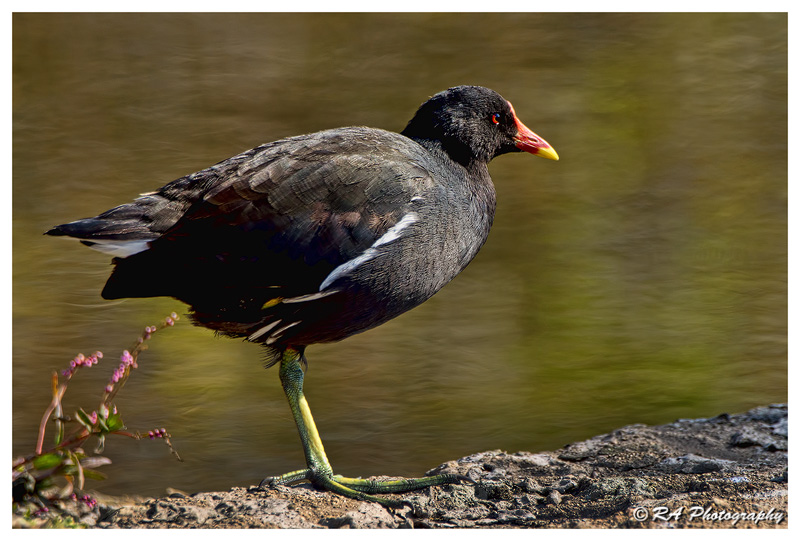 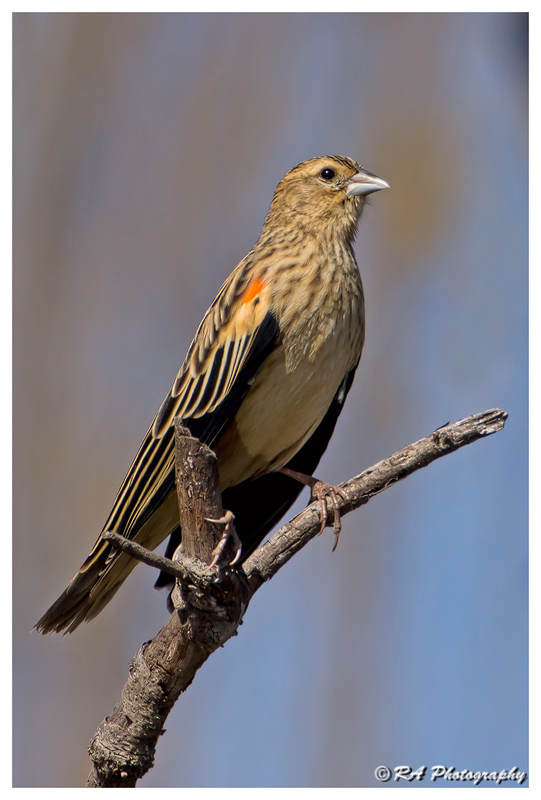 The Marievale Bird Sanctuary is situated in the southern half of the Blesbokspruit RAMSAR site, an area that is also a designated Important Bird Area (IBA SA021) in South Africa. The sanctuary is about 10 km2 in size and comprises numerous, large, shallow water bodies .  The sanctuary hosts the largest variety of bird species in the Gauteng Province and, to date, over 280 species of birds and mammals have been recorded to cohabit the sanctuary.

Marievale is a very popular spot for birders and bird photographers alike and there are quite a few bird hides which afford one the opportunity of some excellent photography. My favourite and obviously the favourite of many is the Hadeda hide. Generally speaking if you are not there by sunrise, the hides are full with guys and their cameras and those bazooka white lenses...

I don't get the opportunity to visit too often but when I do, I am seldom disappointed. I thought I would share some images from my last visit. This was not too long ago before the swallows had left and they rewarded me with some lovely shots. 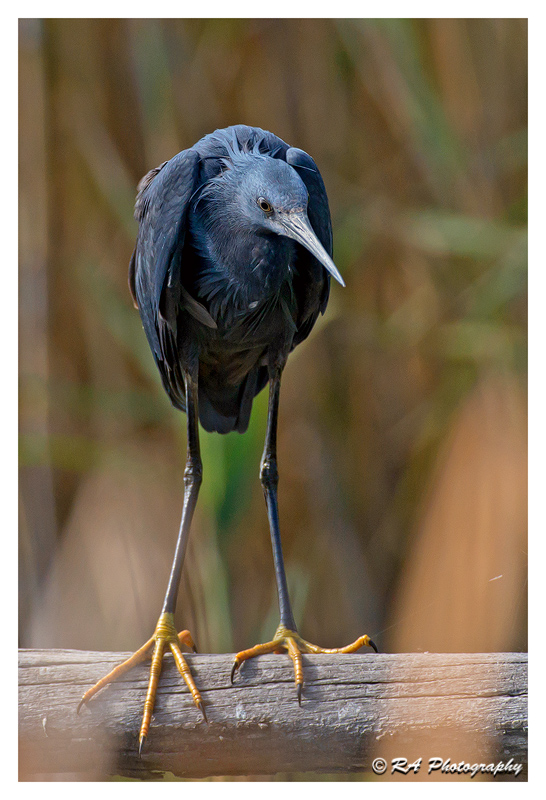 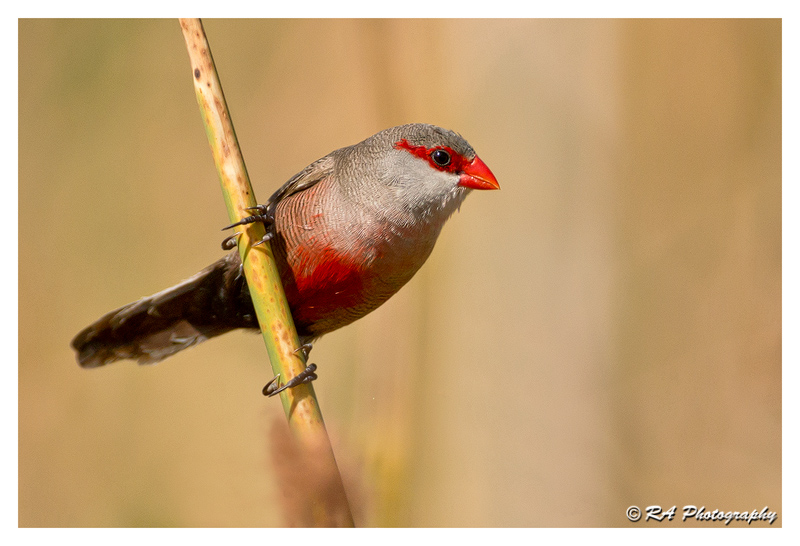 Posted by Robbie Aspeling at 16:36 No comments:

Most people seem to think that Cape Point is the southernmost point of Africa and whilst it is pretty much down south, the true southernmost point is about 2 hours drive and 170km from Cape Town at a place called Agulhas. This is the place where the Indian and Atlantic ocean meet and the true most southern point of our continent.

The waters are treacherous with many ships recorded wrecked over the many years. The conflicting currents of water of different densities and the west winds blowing against the Agulhas Current, can create extremely hazardous wave conditions; these are further exacerbated by the shallow waters of the Agulhas Bank, a broad, shallow part of the continental shelf which juts 250 kilometres south from the cape, after which it falls steeply away to the abyssal plain.

The lighthouse was built in 1848 to warn the passing ships of the dangers. 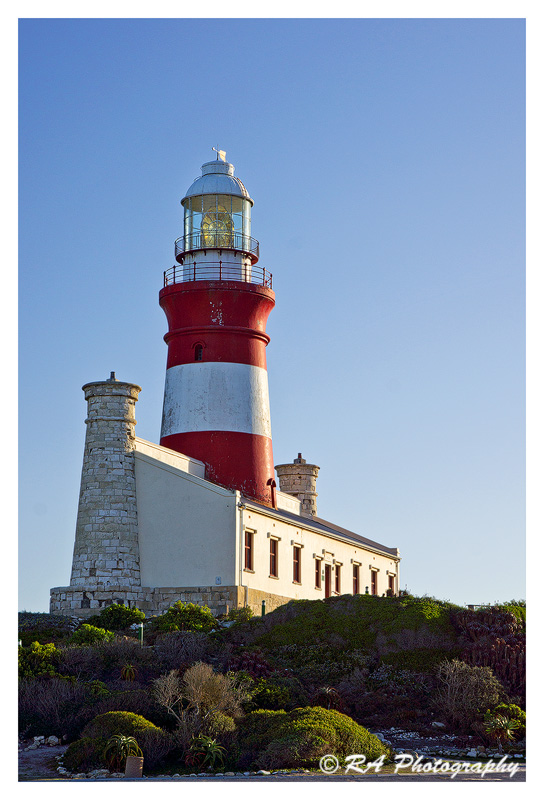 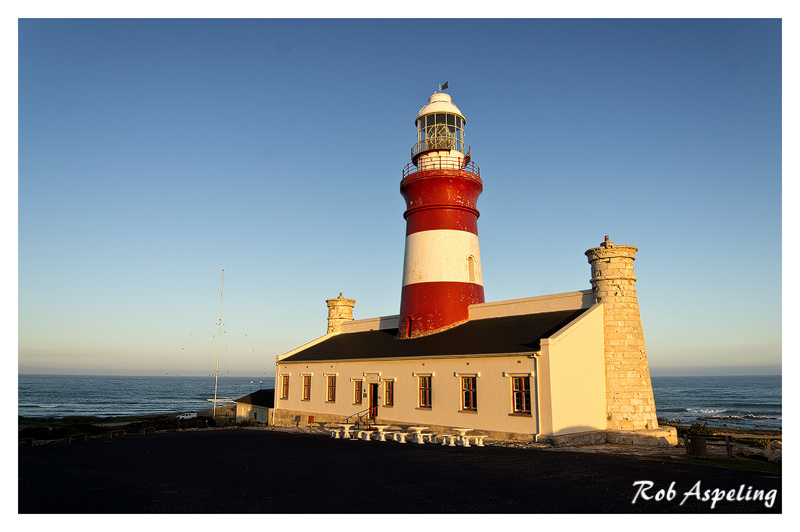 The Meisho Maru 38, ran aground between Suiderstrand and Cape L'Agulhas on 16 November 1982. The ship had 240 tons of frozen tuna aboard. During a storm on 31 August 2008 the ship was turned around in heavy seas. 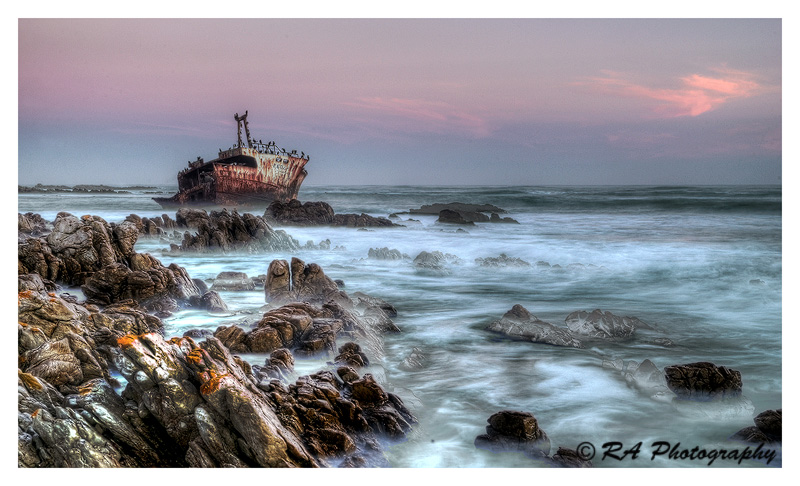 Beautiful sunsets can be experienced from this area. 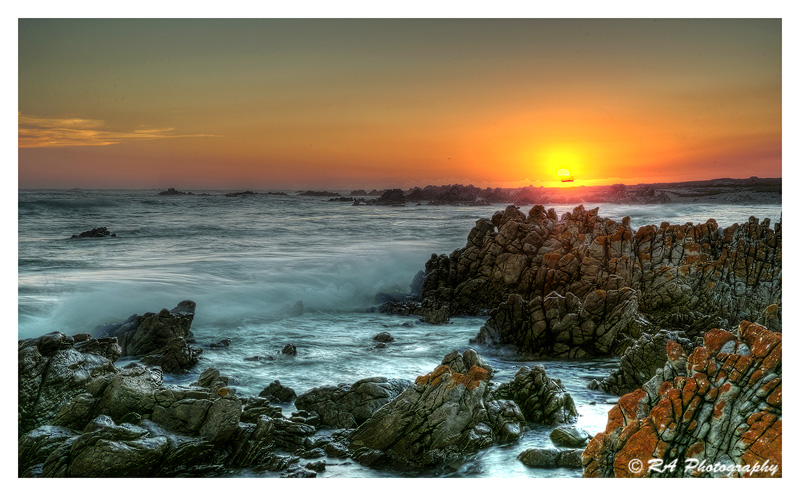 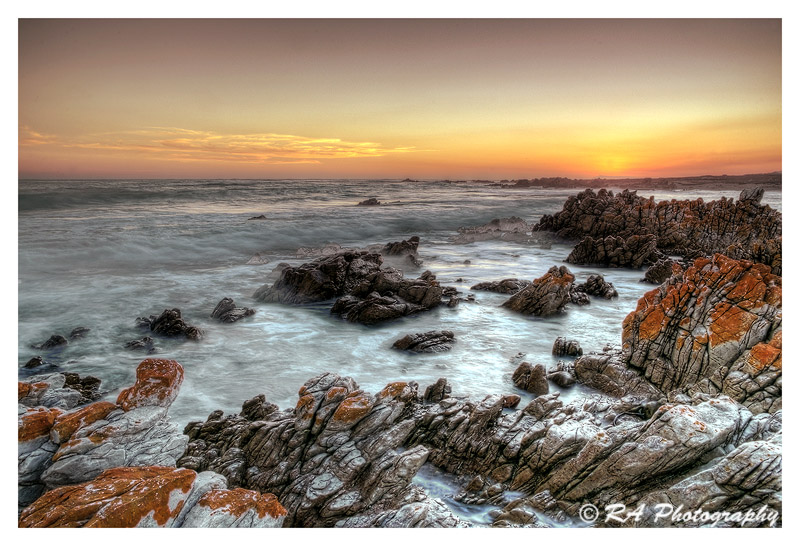 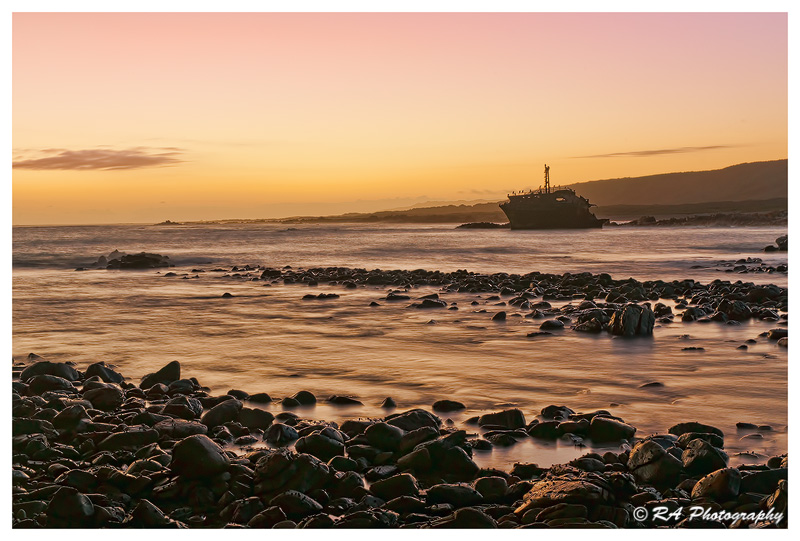 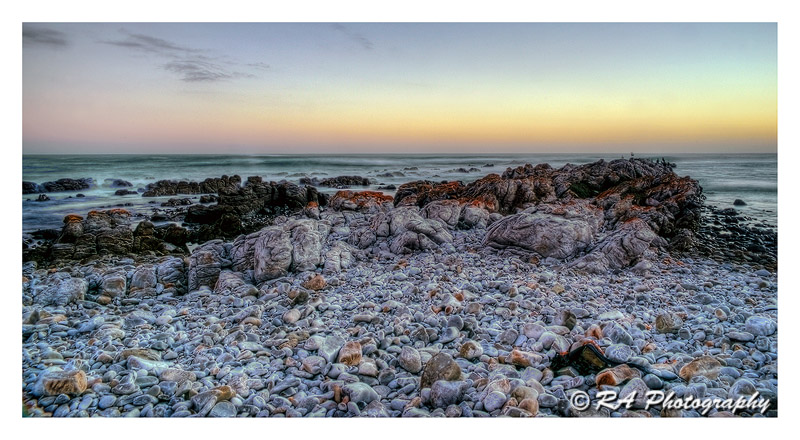 Posted by Robbie Aspeling at 18:11 No comments: