Quick visit to Intaka on a Winter's Afternoon.

I visited Intaka a few times during my last Cape Town trip but was mostly unsuccessful in getting any decent bird images. There is a hell of a lot of construction going on around the Island as well as it being winter so my perception is that the bird life is much reduced than on my previous visits. Even the normally abundant Ibis' which are normally like mossies are a lot fewer in numbers.

The last day of my trip saw me doing some landscape photography and I finished a tad earlier than anticipated and also reasonably close to Intaka. I had the 500mm in the car so thought why not? I had 2 hours to kill and it couldn't be worse than it had been on my visits the previous few times.

I sat in the first hide for about 20 minutes and low and behold the Malachite showed himself for about 30 seconds. I managed to fire a shot even though the lighting was bad and the bird backlit. 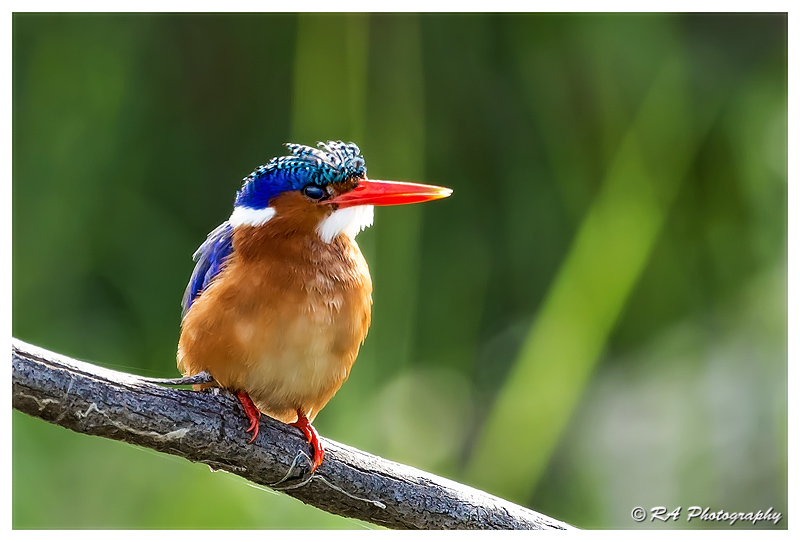 The next visitor, another fleeting one, was the Red Bishop. He was in and out about the reeds and wasn't too easy to get a clear shot. 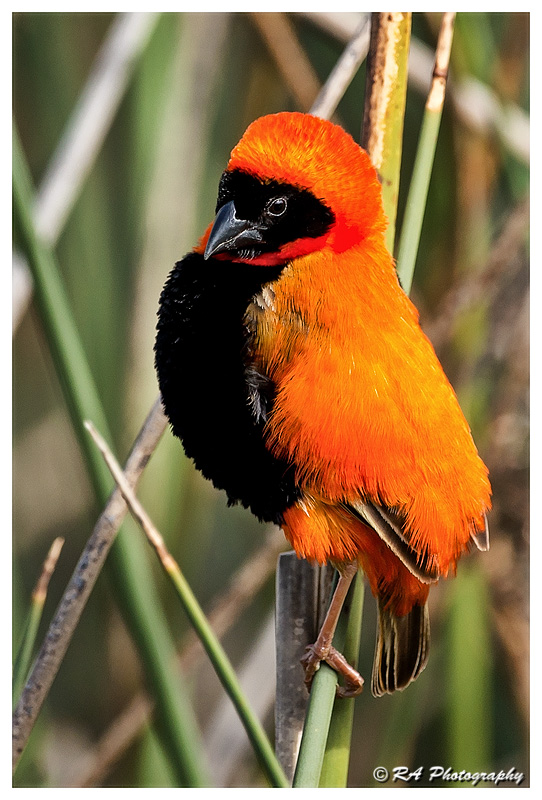 A few minutes later I had the Common Fiscal sneaking in on the side of the hide out of the main line of vision. I swung the camera around and got this quick shot. 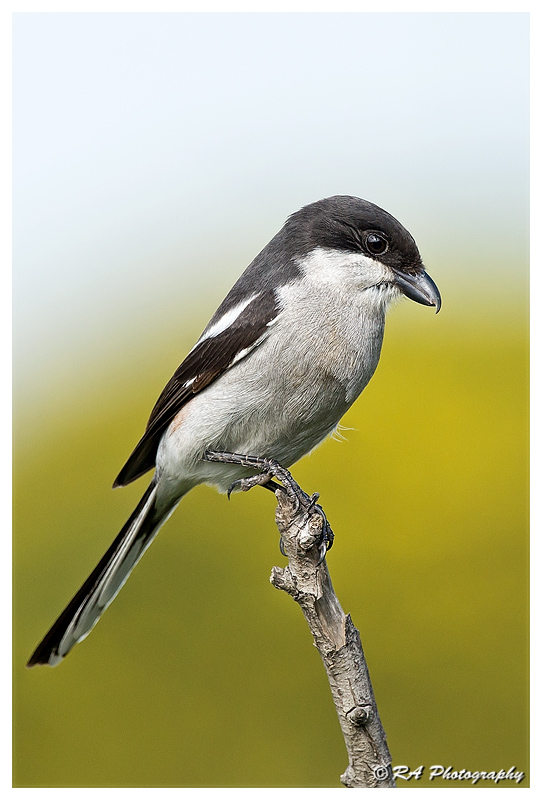 I was getting a bit cold and quite honestly a bit bored so moved to the other hide. There is always activity here but of the more common species that I already have thousands of images of but nonetheless it was worth seeing if anything came up. The birds were in and out the water and I snapped this Cormorant drying himself in quite a stretched pose. 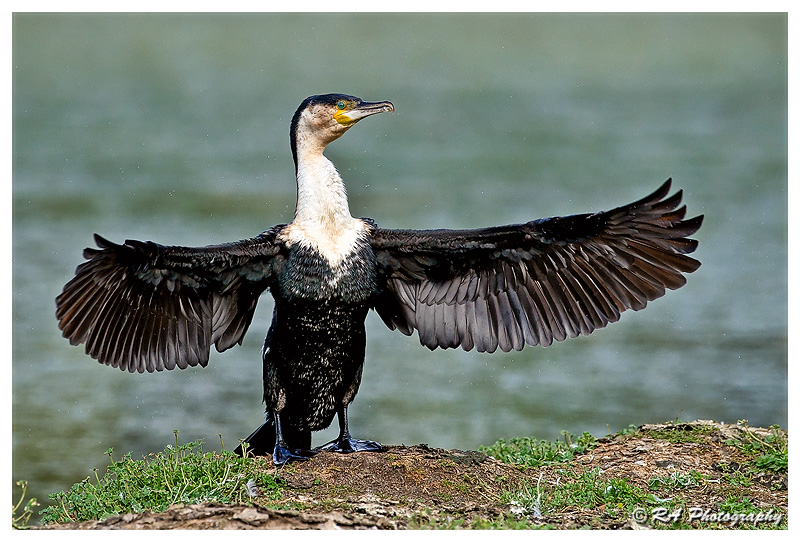 There were some gulls on the water doing some antics and I focused on them hoping to get some "action" shots. Then suddenly they upped and were in the air and I caught this one on his lift off. 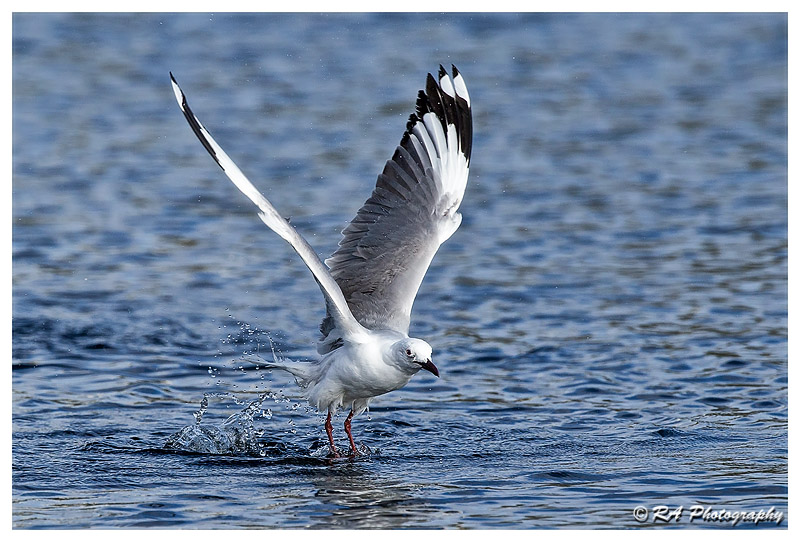 Suddenly there was a mad flurry from all the birds and they scattered all over the place and then I heard the sound of a motor getting closer and closer... Well low and behold, look what came cruising past.. workers on their way to clear some reeds.. 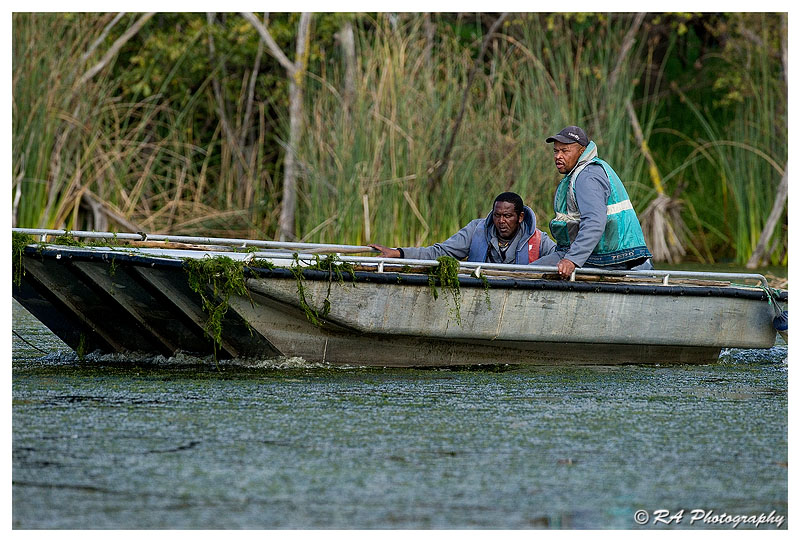 Now that the light was starting to fade and the birds had been chased away, I decided to go on walkies.. I have 2 other favourite spots where at times I have been lucky to get the sunbirds. I headed up this way and en route heard the sound of the Cape White Eyes in the bushes. They were in and out the deep cluttered areas so I sat patiently waiting for them to show themselves. This was not to happen but I did manage to get a nearly clear shot of this little guy. 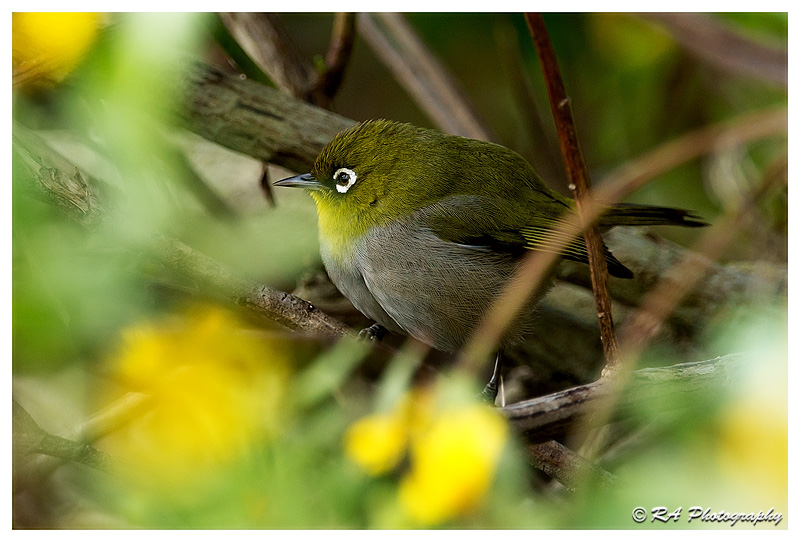 The light was fading fast so after increasing my ISO I headed to the area where I was sure I could find the sunbirds.. I saw them flying over but were exceptionally active and once again not playing the game! I stood half inside the bushes in a small recess in the road and once again waited.. that didn't work so I slowly walked down the path. There was one particular male that was hopping from bush to bush and would pause for a couple of seconds to sing. That was my entree... 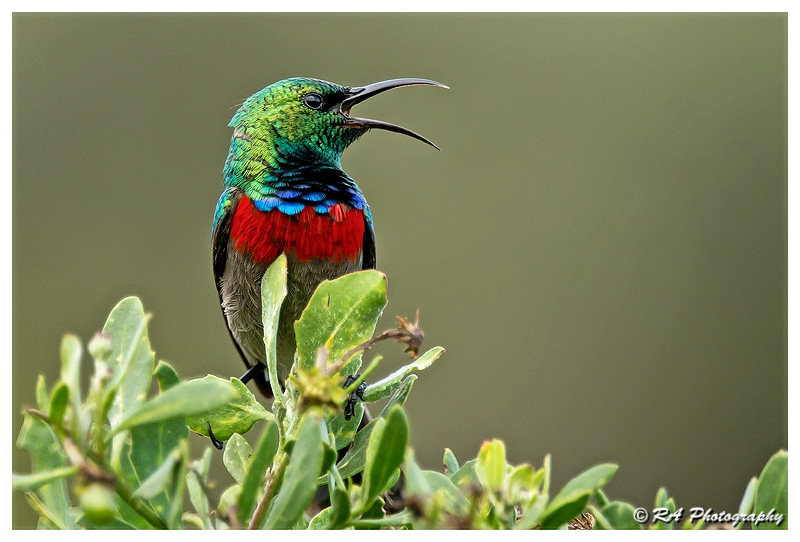 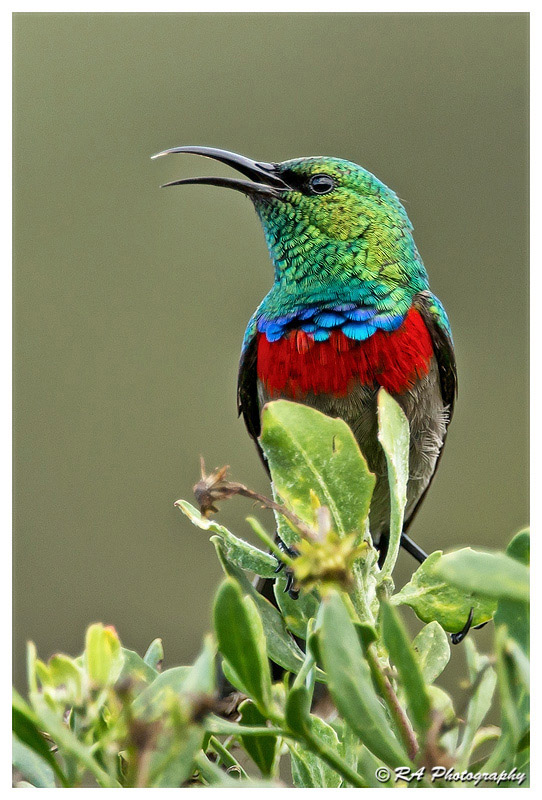 On my way out I stopped back at the first hide and low and behold, who did I find? None other than the Night Heron. 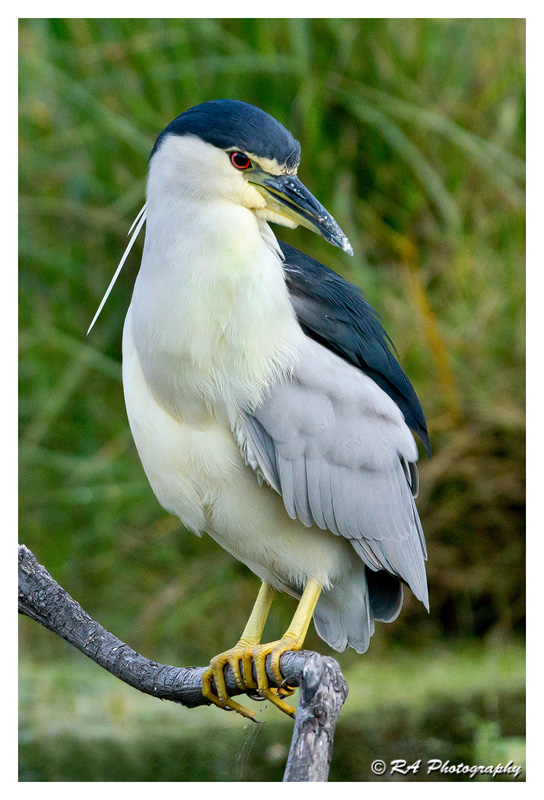 Well with this sighting and image, Intaka was done and dusted for this visit to Cape Town.

Posted by Robbie Aspeling at 19:36 No comments:

An evening at the Barnyard

I last night had the pleasure of attending a great musical at the Barnyard theater. Maybe great because the music was from my days.. it was called The 80's vs the 90's. I must say that even my son who was only born in the mid 90's also said that he liked the music and show so it really has appeal for all ages. Some nice rock and roll as well as some more calmer songs. The show is a never-ending Juke Box that takes you on a ride through two decades of nonstop hits. The lighting is superb with a plethora of colours abounding throughout the show.

Now I know "proper" cameras are not allowed and since I did go to enjoy the show, not photograph it, I took one of Sony's "little" cameras along. Now when I say little I am referring to size and not performance. Sony's NEX  range of cameras have the same size sensor of their larger brother APS-C DSLR's and have interchangeable lenses making it a complete system. I took the standard 18-55mm lens along because all I wanted was some general shots and I wanted to see the performance in the very low light. No flashes used, just light from the performance. I had to push the ISO up to between 1600 and 3200 to get some decent shutter speeds and reviewing the images this morning, I am very pleased with the performance and versatility of the NEX-F3 that I used. (this is the "baby" of the NEX family) 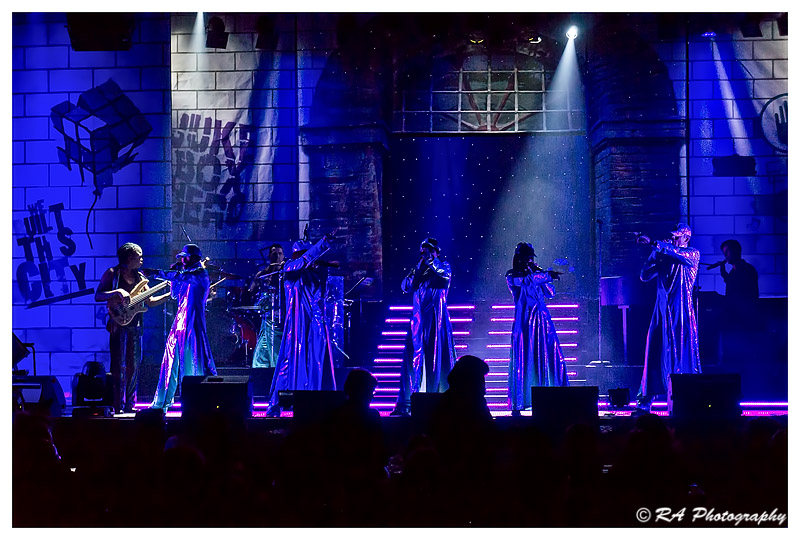 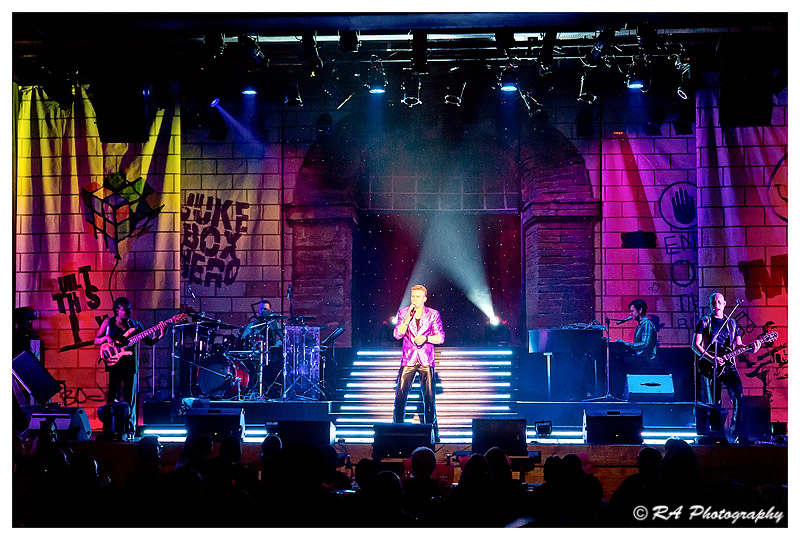 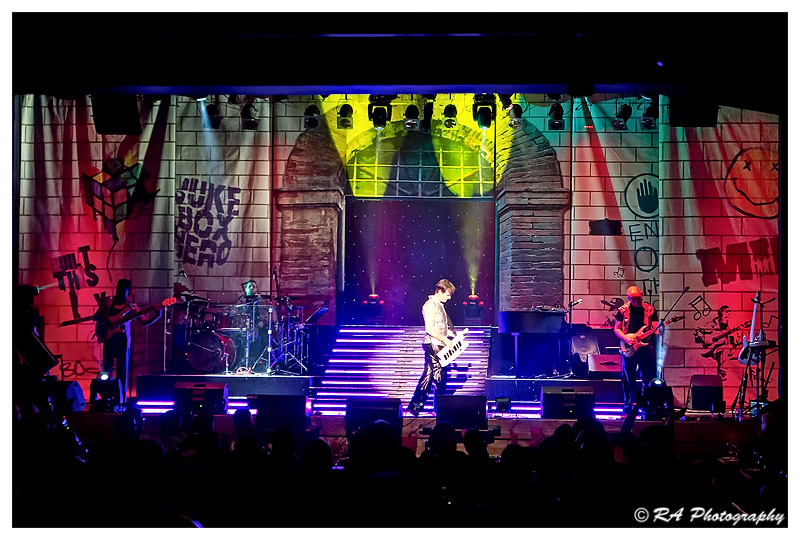 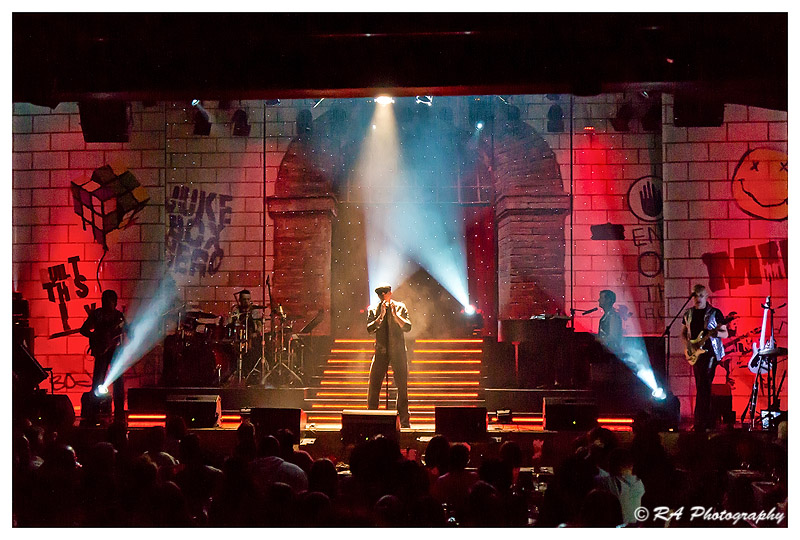 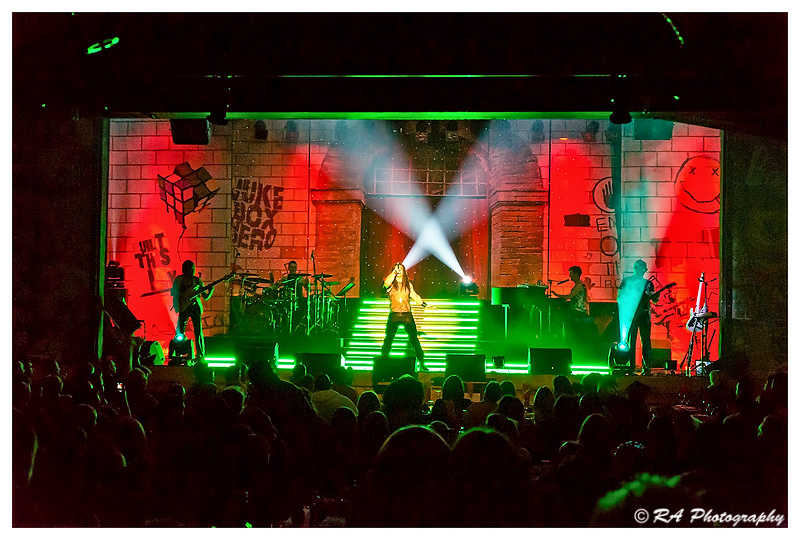 As I looked northwards I saw that the clouds from the previous day were just starting to break up. Now up in Gauteng that would mean sunshine but in the Cape this could just signify one of the 4 seasons for the day.

Nonetheless I decided a photographic trip was on the cards and I set my heading through Durbanville towards the little town of Philadelphia.

Philadelphia is a beautiful little historic town nestled off the N7 from Cape Town to Malmesbury about halfway between Melkbosstrand and Malmesbury. It lies at the beginning of what is known as the "Swartland". The town itself has been preserved in its original state with one of the most beautiful church buildings in the west coast area.

My first stop just outside Durbanville was the hilltop restaurant of one of the wine estates. On a clear day beautiful sights of the mountain and Cape surrounds could be seen. Alas, this was not one of those days. 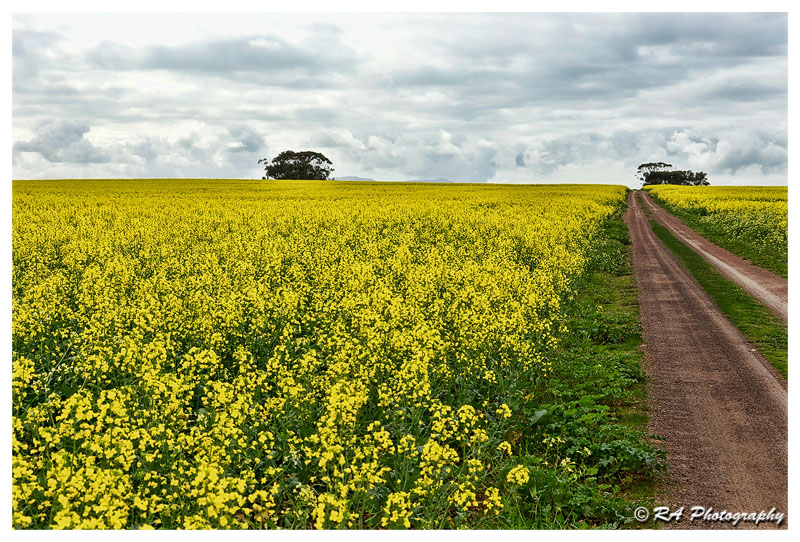 Like with so many small towns, the first building to catch your sight is the place of worship. This beautiful church at the entrance of Philadelphia. 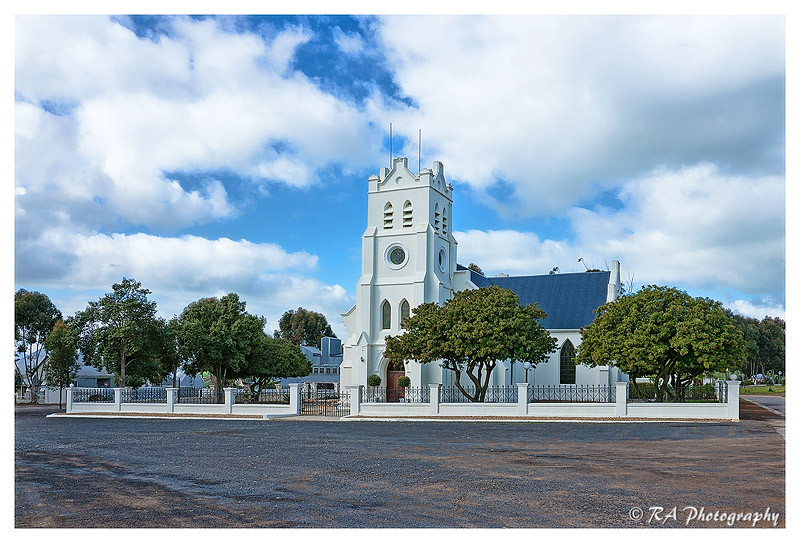 The town has some really lovely old traditional houses. 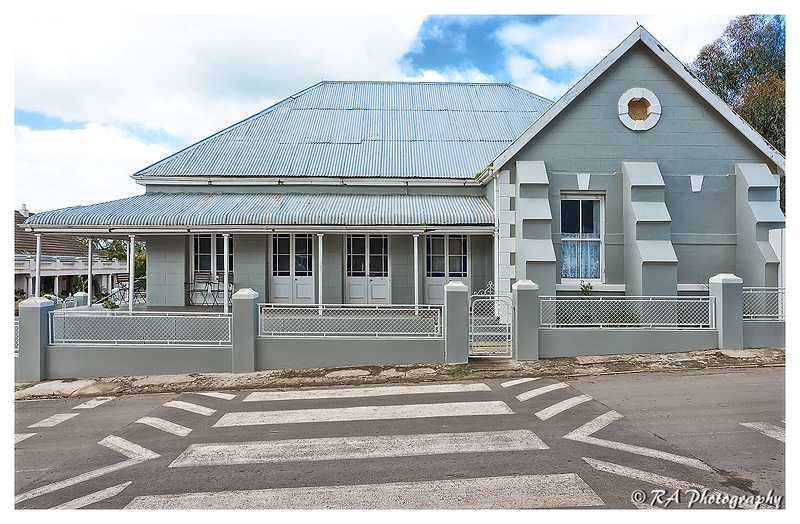 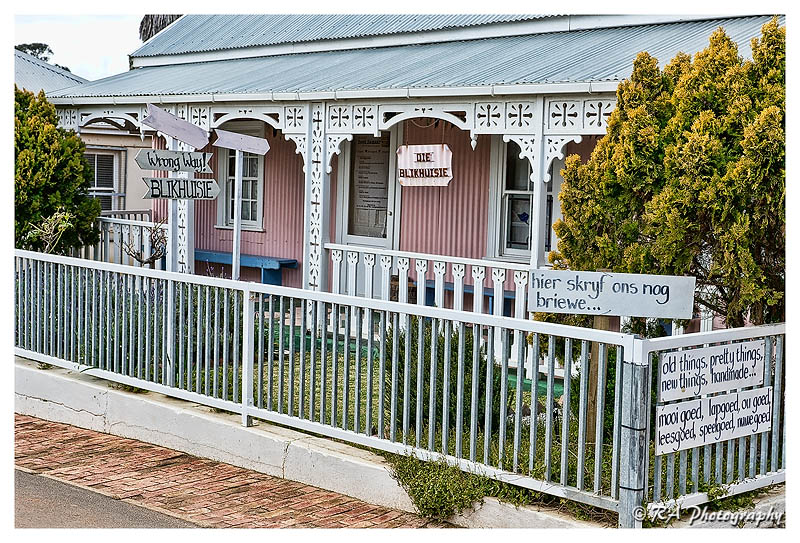 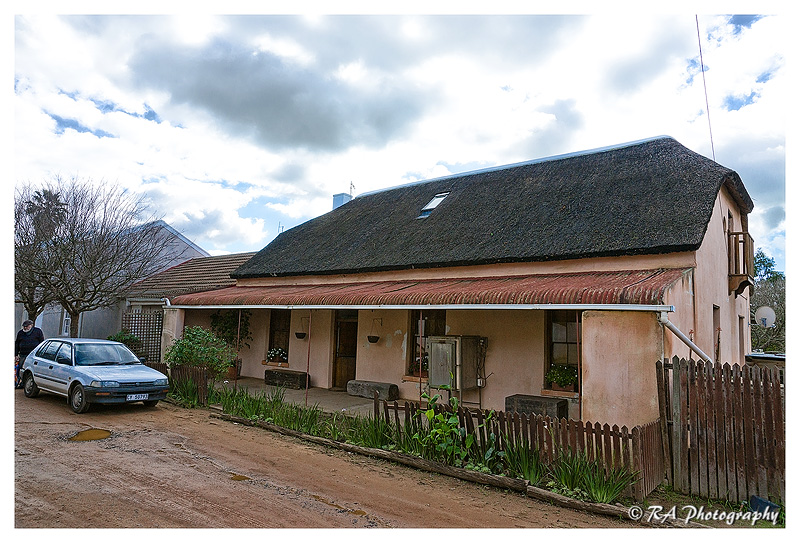 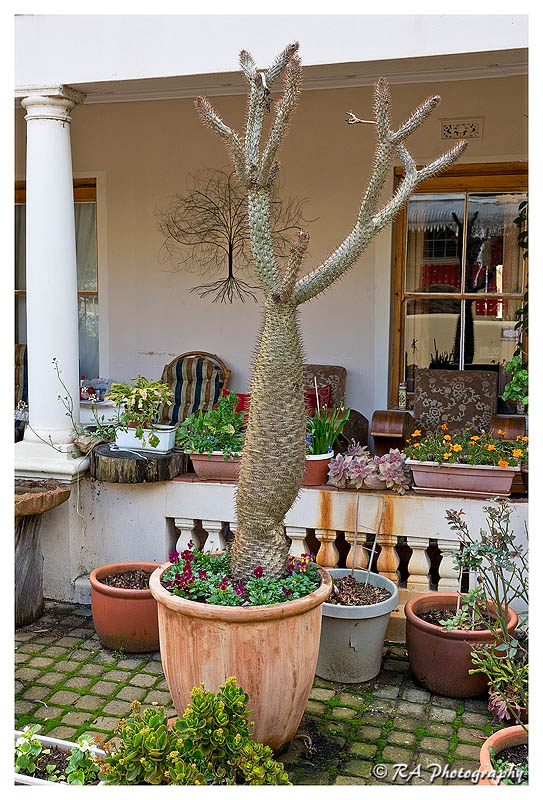 Cape Town - Out in the country

I  have been fortunate to spend a bit of time out and around the surrounds of Cape Town. I ideally wanted to photograph the Canola fields in full flower but my visit was a little early. I did manage to photograph a field or two but enjoyed the outdoors and fresh air away from smoggy Johannesburg more than anything else.

Canola was developed through conventional plant breeding from rapeseed, an oilseed plant used in ancient civilization as a fuel. The word "rape" in rapeseed comes from the Latin word rapum meaning turnip. Turnip, rutabaga, cabbage, Brussels sprouts, mustard and many other vegetables are related to the two natural canola varieties commonly grown. Canola oil is then made at a processing facility by slightly heating and then crushing the seed. 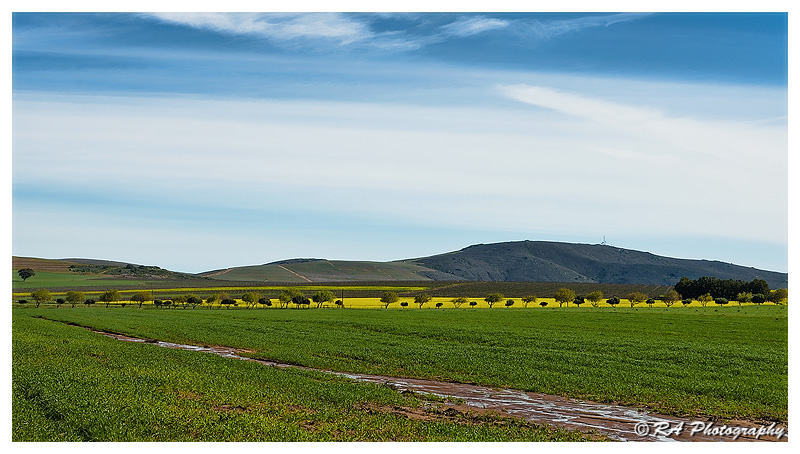 Posted by Robbie Aspeling at 21:03 No comments:

I am currently in Cape Town and it is miserable, wet and cold. Fortunately the weather was a lot better yesterday and I took the opportunity to head north out of Cape Town. I took the older road, driving slowly and stopping when I saw something interesting to photograph. I did manage some nice images of the Canola fields just starting to flower but I will do a separate posting of those.

My first stop was when I encountered a tree lined road with the much hated Bluegum trees..

I headed down the winding roads and found myself in the quaint little town of Malmesbury. The town is the largest in the Swartland which took its name from the Renosterbos, an indigenous plant that turns black in the warm, dry summers. The area is especially known for its grain and wine cultivation as well as sheep and poultry farming.

Malmesbury was named after Sir Lowry Cole's father-in-law, the Earl of Malmesbury. The first farms were allocated in 1703.
Moving from Malmesbury the winding road lead me to little town called Darling. Now one of South Africans' icon actors Pieter Dirk Uys has made this little town his home, He is more famously known as the famous "Evita Bezuidenhout", a white Afrikaner socialite and self-proclaimed political activist. Uys has a rather unique  little theatre and museum where I spent quite some time milling around and taking it all in.
On entering the museum the political history is ever so present. 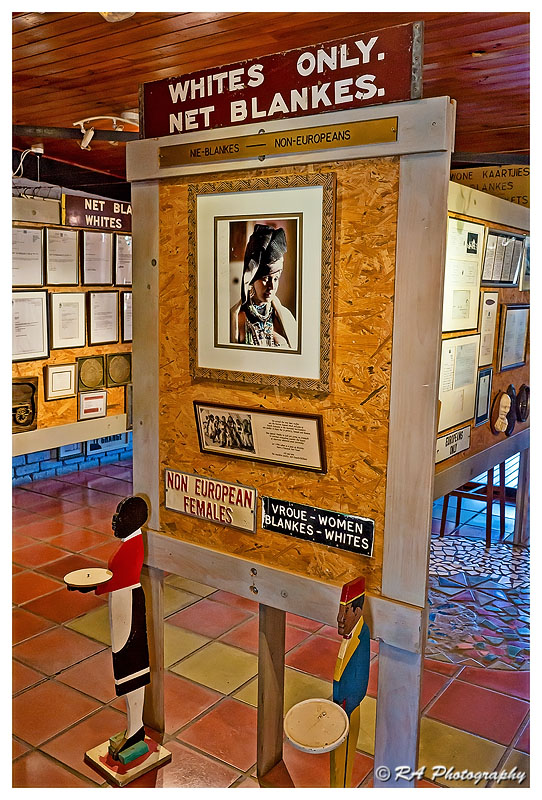